Welcome to the Bead Soup Blog Party!  Thank YOU to Lori Anderson, creator and hostess of the BSBP and congrats on her upcoming Bead Soup book!

My partner this time around is Shirley Moore, (Beads and Bread this link will take you to her blog and the soup mix I sent her).  Shirley does beautiful seed beading so when I mixed her soup, I thinned my seed bead stash a tiny bit by sending her packages of seed beads in a variety of sizes to match the focal bead Chris made for her.

This is what she sent to me (I told her I was a fearless beader, and she did give me a challenge!). 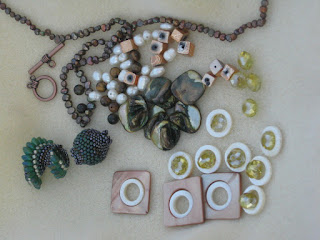 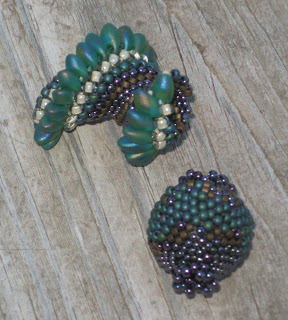 Beaded pieces handmade by Shirley.  I give Shirley HUGE kudos for making a Cellini Spiral using the long Magatamas.  I love those beads but I absolutely CAN NOT work with them.  They are the one seed bead that is not my friend.  I can't seem to wrap my mind around how they are supposed to lay in order to have them be all the same.  No matter how many times I try, I can not make it work.  Defeat, thy name is Magatama.

So when I received my soup, I was stumped.  The beads were all very lovely, but how do I make them work with the beautiful focals Shirley made for me.  What they really reminded me of were plants.  So the first thing I did was stitch the two pieces into one piece and added embellishments. 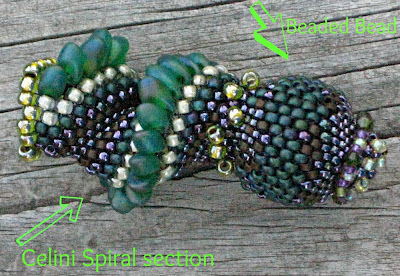 Cool huh?!  I added some coordinating seed beads at the base to match the ones where I joined the sections and then embellished the top with 2.5 mm olivine Swarovski crystals and size 15 seed beads.  But then the "NOW WHATS" set in.  I tried to figure out how to make this into jewelry.  I. really. did.  Fail.  Chris suggested I needed a pot for my plant.  So originally I thought a tiny terracotta pot would be the answer.  We found tiny wooden ones at Hobby Lobby in a plain pine type wood.  So I colored it with a brown Sharpie marker and went to town beading it using Delica beads in peyote stitch. 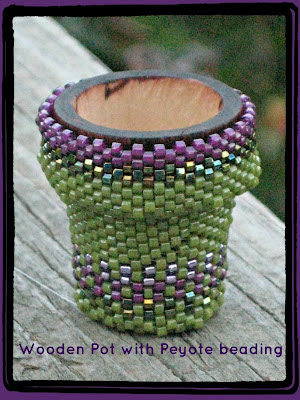 After starting over several times (and a few bad words), I battled through with the help of the internet on doing increase and decrease in peyote so I could accommodate the gradual slope up the sides and the lip of the pot.  It turned out pretty well, not perfect, but pretty well.  Thankfully I was able to photograph the good side! It turned out pretty form fitting, so that once I started up the rim, I could not remove the pot without a fight.  I even beaded the bottom of the pot which helped pull the bottom stitches to curl around the base a bit better.  We added modeling clay to the pot and a wooden dowel to support the plant.  Originally we wanted to model it after Audrey 2 from "Little Shop of Horrors" (Chris played Seymore in our college production of the play). 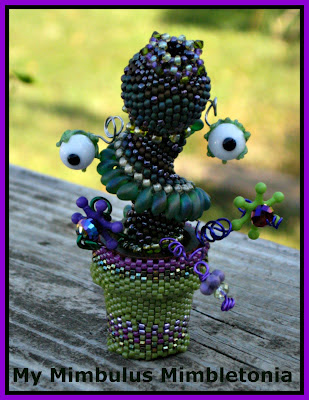 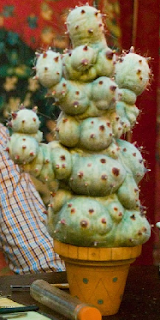 Now having not looked at this picture until I was writing this post, I would say I did a pretty good job!  I have been listening to the Harry Potter audiobook this week and when I heard Neville talk about his plant, I thought that would be a good name for my sculpture.  I am a HUGE Harry Potter fan and am rather sad that it has ended.
Here are some close up details of my MiMi (for short): 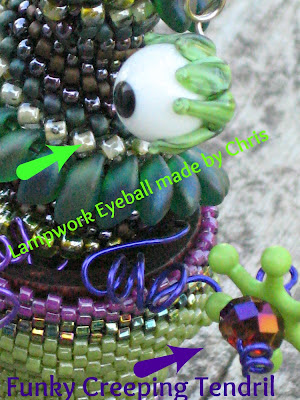 MiMi stands 3" tall and is about 2" wide.  Chris made the lampwork eyeball pods and we epoxied them to steel wire.  I made some creeper tendril/tentacles with colored Parawire, crystals and some of my stash of MyElements funky accent beads.  The eyeball pods were made on the end of a fine wire mandrel similar to making a beaded headpin.

Now the rules of the BSBP state that you have to use the focal and the clasp of the soup mix.  Since MiMi didn't need a clasp, I put together a bracelet with the gorgeous blister pearls, tiger's eye, and Chinese crystal so that I could use my clasp.  Since it was a double strand clasp, I added a length of chain also. 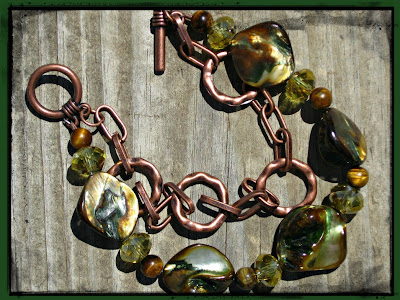 Absolutely fabulous!  Those pearls are so pretty, I wish I had several strands more!

So now that you have seen my BSBP project, here are the rest of the blogs to hop around to:
Hostess, Lori Anderson, PrettyThingsBlog.com


Tina Bosh, Every Good and Perfect Gift
Tracy Bell, Copper, Glass and Recycled Trash
Vonna Maslanka, Just Vonna
Thanks for visiting, I hope you will stop by again!
Posted by Unknown at 11:51 PM

Wow! You are amazing. That is so cute. And the bracelet is beautiful. I love the pearls and the copper together. Great job!

Ok, I have to borrow an English term...I am gobsmacked! That is so cool, I just can't believe it! I love Little Shop of Horrors, and Harry Potter! You are right, you are the fearless queen, and I bow to your magnificence! The skill and imagination between you two is boundless. And then to top it off with that cool bracelet! Hugh standing applause to you both!!!

Your flower pot is really cute and creative! Love that bracelet too!!! Enjoy!

Love your soup and the beads Shirley made! The flower pot and bead sculpture are really amazing and the copper/pearl bracelet is gorgeous!

Fabulous piece, Stephanie - so very creative. Hats off to you:)

Your potted plant is so fun and cute! Great idea! And the bracelet is wonderful too!

I think you took an inspired turn with your little sculpture. I love that the beads that are your nemesis make the seeming smile of the piece. excellent

Kidding ! I love the cactus, through XD

The bracelet is cool but the sculpture is just fabulous! Love it! The eyball and the beadwork.... just perfect!

OH, wow, your little plant is so cute! and so original!!! Love it!!! The bracelet is beautiful, too, but I think MiMi steals the show!!!

Oh my, that is so much fun. I would never think of that but you are definitely up for a creative award of some sort!
Love Mimi! Nice bracelet too.

Talk about thinking out of the box! Love the creativity with MiMi- proof that beads lend themselves to all sorts of ventures. The bracelet is gorgeous.

What a really neat idea to make a sculpture with those two focals!! I love the Harry Potter reference as I'm a big fan also. Your piece definitely brings a smile to my face. :D

MiMi is just awesome! <3 the little guy!! And the bracelet aint too shabby either!

Your designs are amazing -- good job!

What a creative idea! ;0))) Mimi is sooooooo cute!

What a fantastic beaded sculpture! And, the bracelet is stunning!

The soup you rec'd was lovely - that beadwork piece is... WOW! But I can see where I would have been challenged with it.. Your result is fun and cute! Props to you! Hey - nice bracelet too!

your plant is hilarious! now hand over that bracelet(plz)

Mimbulus Mimbletonia - - I was not expecting that! Very interesting...

OK, that is just awesome!

LMAO that MiMi cracks me up! So clever and inventive. Good for you for going out of the box that way :) And you're right, she didn't need a clasp - well done on the more traditional bracelet too. Excellent job!

I love the sculpture!!! SO CUTE. and the bracelet is beautiful!

LOVE!!!
Simply awesome!!
That bracelet too!

MiMi has to be the most creative beadwork I have ever see in my life! I am almost at the end of list for the blog hop but I am going to say if there was a top prize for creativity, you would get it!

The Mimbulus Mimbletonia is impressive. I think J K Rowling will be suitably impressed.

Fantastic (literally) use of your soup. I love your sculpture, and I think if you can string the plant on a cord, I can find people who will wear it! Lovely bracelet, too!

Wow! I love it! You took bead soup ingredients and made a delicious layer cake out of them! How fabulous! A true artist who thinks outside the box!

The little sculpture is adorable, what a great way to use those beads. The pearl bracelet is lovely, very nice work!

I laughed so hard when I saw what you created, you totally rock. I love those little eyeball lampwork beads too! <3

Bracelet? What bracelet. There was a bracelet too? Sorry, I couldn't take my eyes off MiMi. *laughs*

I love your sculpture. That's something really special... wonderful design..

OMG! Your plant is too cool! So creative!

You clever, clever lady!!!
I love that you went with something other than jewelry and the end result is so creative!

The bracelet is beautiful also!

Nice to meet you and happy blog hopping!
Shannon

Wow! You are amazing. That is so cute.
I love them all!

Great items to work with. I really like what you did. The cactus guy is so cool and I love the bracelet. Really nice job!

I LOVE how you went outside the box in a big way! Refreshing and joyful! I love the spiral, too -- you did a great job with that. Thank you so much for participating!

with the first foto I thought: "Wow, PeyoteCellini with long Magatamas, wow." I agree with your point of view. All the tries...... nothing worked. And now this. Great!
And with your great beautiful beading work it is now amazing, makes me smile.
Best regards Birgit

Mimbulus made me giggle. That would be perfect to sit on your kitchen windowsill...a great day brightener when you awaken!

How delightful! Thank you for sharing your talents with the world! =)

Wow! Your plant puts a smile on my face and the colors of that bracelet are truly dreamy.

fun options here. love that you did something different. very cool

The sculpture is so cute =D

How wonderfully creative you are! I love your MiMi! The bracelet is just perfect as well! Great job.

OMG! This is really the most creativ work I saw during the blog hopping!!! Your hommage to Harry Potter is stunning! If it would be possible you will get the award for the most creative idea!! :-) Hugs Doris

I am in awe of your imagination! The sculpture is so flipping cute! And the bracelet is lovely, too.

Hi Stephanie,
I love MiMi it is so cute in a oddly weird way ;-)you did a fantastic job on it. Your bracelet is very pretty too.
Therese

Fantastic! I love MiMi, such an original idea. The bracelet is gorgeous too.

That plant is just AMAZING!Like the bracelet too

I want one of those bead sculpture!! That is just awesome! The bracelet is gorgeous too. Great job!!

Oh your MiMi plant is just so cute and imaginative! I do like the bracelet though!

How cool to make that gorgeous little treasure! I know Shirley loves it!

Good job, former partner! How creative! You did a great job.....I would've been stumped for certain. It's nice to see something besides jewelry!
Valerie

WOW! What a great selection. Jewelry, sculpture just everything! Love it all!

Awesome job with your bead soup! So nice to see a beaded sculpture!! The beaded creations that you received are awesome and the those eyeballs are fabulous! Nice work!

very creative, so original!
the plant is too cute!
ciao dall'Italia

Thank you so much for leaving a comment on my post! Your creature is so much fun! :))) Love it, very original! Thank you for making me smile! :) And of course I love the bracelet too but Mimi stole the show!

Wow! Thanks for the wonderful list of other bloggers into beading! I've enjoyed my day just learning and seeing..now for pintrest pinning!! Thank you again!

We put the Pixy in Pixybug! 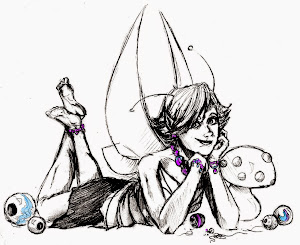 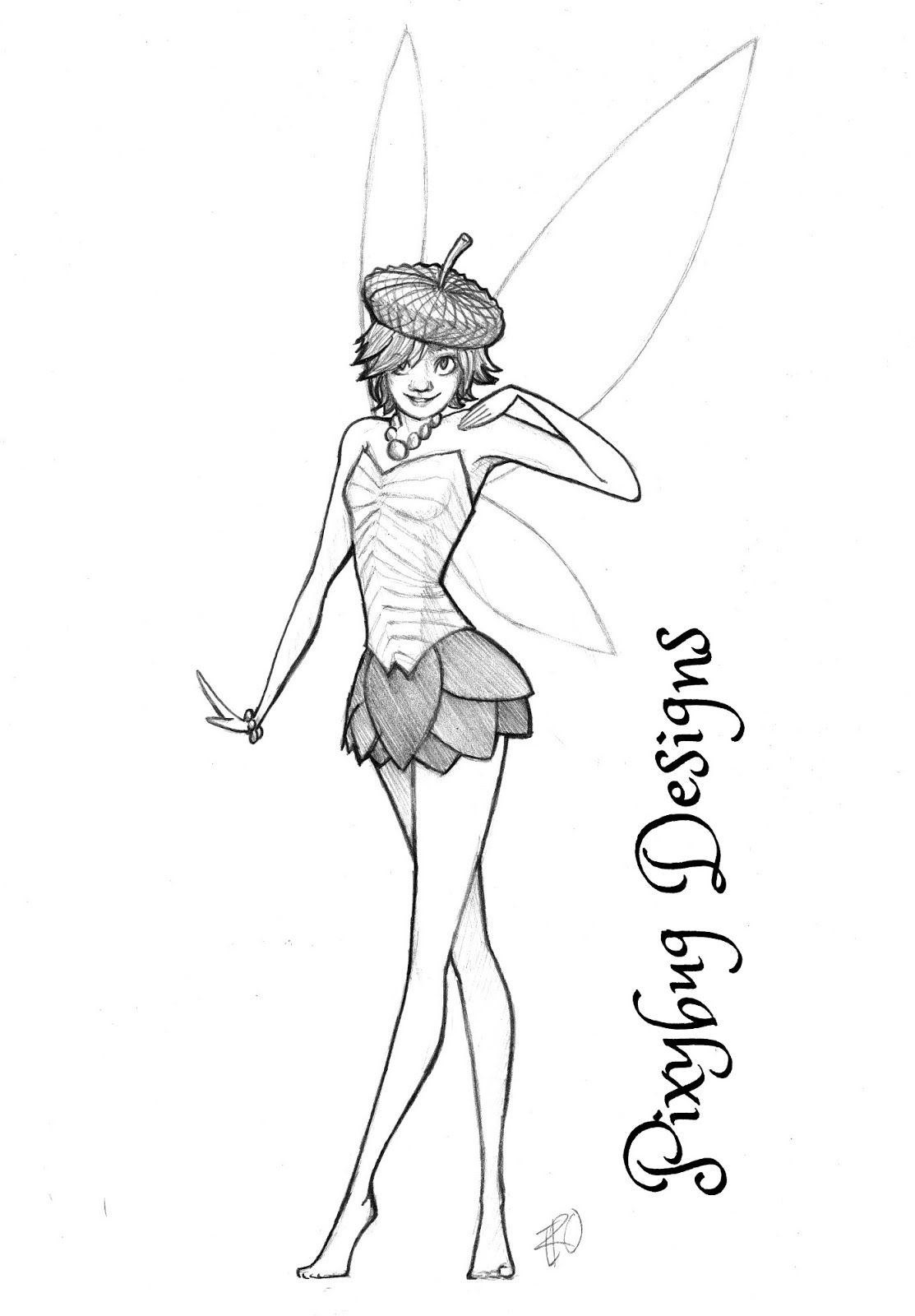 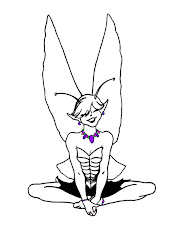